Fly reels are an important part of every fly-fishing setup. The fly rod and fly line are more important, in most cases than the fly reel. There are several things to consider when deciding which fly reel is right for you: 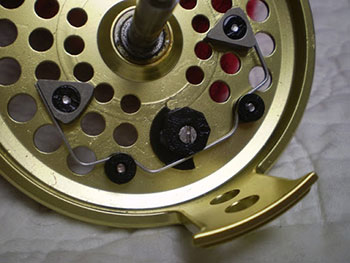 There are two predominant drag systems in today’s reels.

1. Click and Pawl - A click-and-pawl system is often found in traditional reels. It’s simply a toothed gear that is slowed by a spring-loaded clip.

2. Disk Drag
Disc-drag systems are found more often in today’s technologically advanced reels and have many variations. Two or more discs are pressed together, either by a spring or on their own accord (cork), creating friction and producing fish-stopping power.

Cork – These drag systems have very low startup inertia. Newton’s first law of motion teaches that objects at rest like to 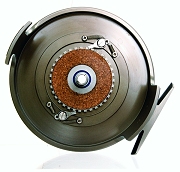 stay at rest, while objects that are moving like to stay moving. This means that the first moments of a fight have the greatest chance of breaking your tippets. However, because cork compresses, the force it takes to get the drag going is lessened, protecting tippets from hard-running fish.

As the fish runs, the cork expands and pressure is quickly ramped up to fish-stopping levels. It is important to manually lubricate cork drags, so sealed cork drags are not an option. If not maintained, cork will dry out and rot.

Also, if it is constantly compressed – if you crank down the drag and just leave it – the cork will eventually lose its memory. Because cork drags do not use a spring to create pressure – spring is innate in cork – loss of memory results in a reel with no drag.

Synthetics (Rulon, Delrin, Teflon®) – These drag systems are heralded because they can last a lifetime. Also, they are self-lubricated, meaning there is no need to lubricate them yourself (in fact, you shouldn’t). It’s possible to seal them so they resist the harmful effects of silt and saltwater. They have slightly higher startup inertia than cork drags, but the difference is marginal.

Carbon Fiber, Graphite – Very similar to other synthetics, the added benefit of carbon fiber is that it dissipates heat quickly. The chances of it overheating and thus causing your reel to lose all drag are close to zero. The carbon fiber is matched with cork or other substrate, such as stainless steel. A sealed drag avoids incursion from salt and silt and is imperative for those situations.

Size
The size of reel you choose should mainly be decided by the amount of fly line and backing the reel can hold. Though a standard fly line is 90’ in length, diameter varies by line weight. Thus, an 8-weight fly line takes up more room than a 4 weight. Larger, farther-running fish need a lot more backing than farm-pond bluegill, requiring a larger spool.

Large-Arbor, Mid-Arbor and Small-Arbor Reels
Possibly the most significant advancement in fly-fishing technology since graphite fly rods is the introduction of large-arbor and mid-arbor fly reels.

There are several benefits to having a larger arbor:

Considering the fish you will be catching with smaller rods and reels are probably themselves smaller, not having the benefits of a more consistent drag or faster line retrieval is negligible as you'll be stripping in most smaller fish. In many cases, in smaller sizes especially, the drag is simply a tension mechanism to hold the line on the reel and avoid an overrun when pulling line off the reel when casting.

Several reels today have adopted a mid-arbor. These reels combine all the positive attributes from both small- and large-arbor reels; however, the benefits are not as pronounced. The key is to get a reel that fits the size and weight of the rod. I often go a size smaller for freshwater applications to reduce fly reel weight. Most freshwater fish will rarely test your drag with the exception of invasive species like steelhead, salmon, stripers and carp.

Stamped Metal – Stamped-metal fly reels are both heavier and much less durable than either machined or die-cast fly reels. They are the most inexpensive reels on the market though, so if you’re trying save money, and you aren’t fishing for anything that can test a fly reel, stamped metal could be all you need.

Die Cast – Manufacturing advances have made die-cast reels lighter and stronger in recent years. If you are looking for an economical fly reel that performs well, die cast is a good option. It can’t be anodized, however, so it is susceptible to corrosion.

Machined – Machining produces the most durable reels available. If you are going to be fishing areas with a lot of boulders and rough terrain, machined reels are an excellent choice, as they can handle more abuse than either die-cast or stamped metal. Machined reels are also more corrosion-resistant than other reels because they can be anodized, thus making them good for saltwater, glacial silt and other harsh environments. Machined reels are also lighter weight and more expensive than the aforementioned.

Today's wide array of reels, produced both domestically (U.S.) and overseas, have resulted in a plethora of well built durable reels. A fly reel often becomes as much a fashion statement when combined with an expensive rod. There's just something about a cool looking fly reel that is infectious, but I diverge...

The reality is: You don't have to pay anymore than $100 - 200 for a very high quality machined reel today. You can get a aluminum cast reel for as little as $30 that will fit the bill for nearly all of your freshwater needs. Only when you're targeting saltwater or hard-running freshwater fish, do you need to be concerned with sophisticated drag anatomy.