Question: How often do we go back to the same fishing spots over and over again?

It must be human nature to return to the comfortable environs where one has traveled previously. Fishermen and hunters are notorious for fishing and hunting - memories. 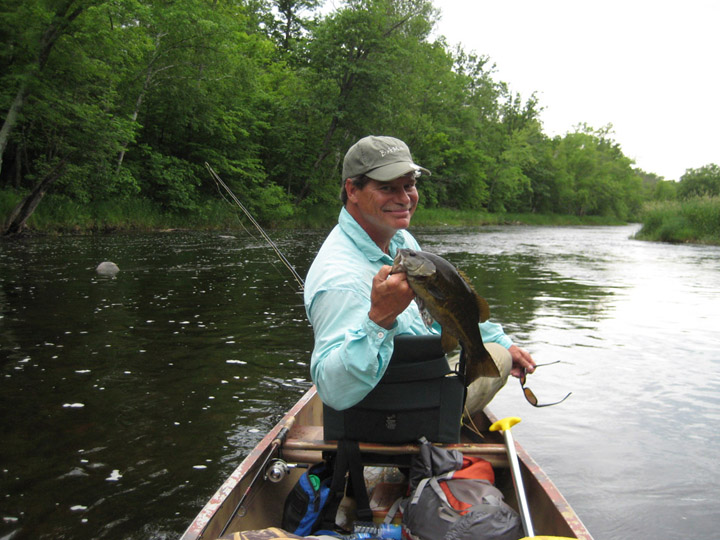 My brother and I recently tried an entirely new river system for smallmouth bass.

It's a finicky watershed that drops very quickly in the spring to early summer making navigation almost impossible by mid June. We were watching it closely after hard rains had colored it and filled it with water.

Last week my brother reported it was down and clear. For river fishing fanatics, that means go time!

We planned a mid-week trip, as we generally do to avoid competition. We picked a specific stretch after questioning some locals, hoping for a 4 - 5 hour float in a canoe, which is generally what we go for.

We always anchor when someone hooks up, so if the trip takes a little longer...well that's OK.

Early in the season in Minnesota, we hit tributaries of the Mississippi and St. Croix Rivers that offer some great action before the lose their water and are "un-floatable".

On most rivers, large and small, we carry both fly rod and spin rod outfits. You never know on a particular day if the fish will prefer flies, top water plugs, buzz baits, streamers, etc. So we go well armed for any eventuality.

Also, the sternsman, in a canoe, can fire off quick casts on slow sections with a spinning outfit that would be very cumbersome to try with a fly rod. Usually the bowman, is flogging away with the fly rod. We switch about every hour or after the frontman has hooked up several times or is tired.

This river was perfect, this day. Just enough water for us to glide over most of the large rocks that bespeckled the riverway, punctuating stretches of riffles and runs, slowly meandering through forests and fields.

Early spring is also a great time to be unmolested by biting insects that can really raise hell on small rivers in just a few more weeks.

One remarkable aspect: All the action was top water!

I've seen this before and it's something for which we all pray. I started out with a tried and true jointed Rapala and then a Murdich Minnow streamer. No takers.

I then put on a Chug-Bug (my go to top water spinning plug) and caught a nice fish while steering in the stern of the canoe. My brother saw that and switched to a white blockhead popper. Then things started to happen. It so happens the fish were mainly looking up this day and we were more than happy to oblige them.

The average size of the smallmouth was very respectable - about 16". We caught very few fish under this length and several over, up to 18". We lost a couple of bigger fish. On most trips you're always going to miss some fish, drop hooked fish, and occasionally land some, if the fishing gods are with you.

We would encounter periods where we wouldn't get a bit for 1/2 hour and suddenly hit two or three fish in rapid succession. This is all pretty typical on a good day's fishing.

The weather was ideal, about 75 degrees with no wind to complicate fly casting.

We also hit enough rough water to appreciate the experienced canoe skills we've garnered over almost 50 years of canoeing. If you're on tricky water, it helps to have an experienced bowman who can help steer and call out hazards.

Without rain, and if this river dropped only 3 - 4 inches, our trip would have been a lot different.

As it was, we lucked out on this new water, which is always a crap shoot, but ALWAYS worthwhile.

So quit hammering the same tired spots, rivers and lakes over and over and explore a bit in your area. Try that little lake you've been thinking about for years. Drop into that little stream or river and give it a shot.

You just might find your new favorite place to fish!